At a White House meeting focused on the Florida school shooting, President Trump took a brief detour into the world of solar power, bragging that he's brought back domestic manufacturing and that America makes better solar panels than China.

The problem? Those statements aren't supported by facts, experts say.

Veering away from remarks on preventing gun violence, the president told a group of governors that his recent import taxes on foreign-made washing machines and solar panels are already having a positive impact. After suggesting the solar tariff has been in place for two months — it's actually been less than three weeks — Trump claimed that American solar manufacturers are "opening up at least five plants."

"We had 32 solar panel plants. Of the 32, 30 were closed and two were on life-to-life resuscitation. They were dead. Now they're talking about opening up many of them, reopening plants that have been closed for a long time," Trump said.

But in reality, there's no evidence the import tax has done anything to revive U.S. solar manufacturing, especially after such a short period of time, said Hugh Bromley, a solar analyst at the research firm Bloomberg New Energy Finance.

"There's no massive wave of capital investment in new facilities occurring at this stage, and nor do we really expect it to occur," Bromley said. 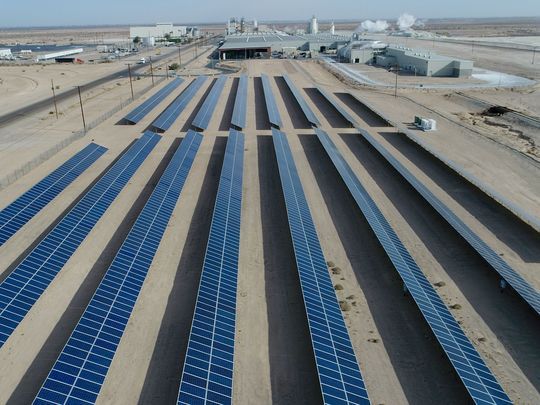 Solar power has boomed in the United States over the last decade,

Solar power has boomed in the United States over the last decade, creating hundreds of thousands of jobs and helping reduce climate pollution. But many U.S. manufacturing plants have shut down amid a wave of lower-cost solar panels from other countries.

Solar analysts don't expect Trump's import tax to make much of a difference. For one thing, the tariff only lasts four years, and it gets smaller over time. For another, U.S. solar companies imported more panels than they needed last year in anticipation of the tariff, building a buffer. There are also plenty of loopholes. Solar panels built in India, South Africa and dozens of other countries are exempt, as are panels built overseas by First Solar, an Arizona-based company whose solar cells have a unique chemistry.